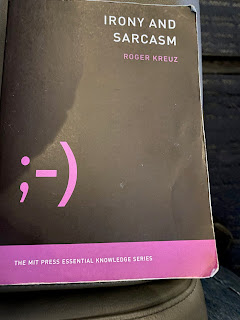 Irony and Sarcasm by Roger Kreuz is the fourth book I have read in The MIT Press Essential Knowledge Series--69 books about technology and the philosophy of technology.  The books examine a difficult and controversial topic from as many angles as possible in less than 200 pages.

In Irony and Sarcasm Kreuz covers the history of his topic beginning with Socratic Irony--arguably the smartest man who ever lived declaring he was ignorant. In the introduction, Kreuz makes clear why he wrote "a biography of two troublesome words" instead of just one:  "Irony isn't a loner; it spends a lot of time in the company of a shady relative with a checkered reputation."

Kreuz carefully separates irony from sarcasm, and also from coincidence, paradox, satire and parody--all topics that are (ironically) confused with irony.  In the first chapter, "Preliminaries," Kreuz begins with non-literal language:

If people only employed literal language,, communication would be devoid of nuance, innuendo, humor, and poetic turns of phrase.

Kreuz begins to define irony with Socrates and the rhetorical tactic that has come to be known as Socratic irony.  The rest of the continues with examples of irony then moves to the death of irony (with an ironic smile I can almost see).  Irony died after 9-11. Irony died with blizzard of lies from Trump and his many wannabes.  It seems irony has died for centuries and never goes away.

No one ever predicts the death of sarcasm.  To say "Irony is dead!" is almost always a sarcasm-tinged comment.

If you are nerdy about language, you (sincerely) will enjoy this book.

The Red Wheelbarrow and Other Poems by William Carlos Williams

Spirits in Bondage by C.S. Lewis

Reflections on the Psalms by  C.S. Lewis

The Pope at War: The Secret History of Pius XII, Mussolini, and Hitler by David I. Kertzer

The Last Interview and Other Conversations by Hannah Arendt

The Echo of Greece by Edith Hamilton

If This Isn't Nice, What Is? by Kurt Vonnegut

The War That Made the Roman Empire: Antony, Cleopatra, and Octavian at Actium by Barry S. Strauss.

The Netanyahus by Joshua Cohen

Book of Mercy by Leonard Cohen

Prisoners of Geography by Tim Marshall

The Life of the Mind by Hannah Arendt

Civilization: The West and the Rest by Niall Ferguson

How to Fight Anti-Semitism by Bari Weiss

The Next Civil War by Stephen Marche

Tanks Attack, They are Designed for Offense

From their first use as land battleships in World War I, tanks are an attack weapon.  They can be used in defense, but as my last post poi... 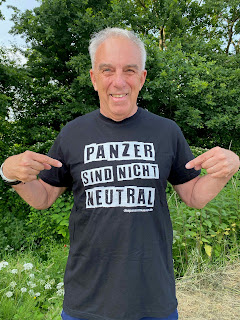