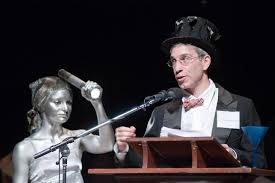 Marc Abrahams, Ig Nobel emcee,
Illumination by Human Spotlight
Marc Abrahams is the editor and founder of the Annals of Improbable Research and the co-founder and Emcee of the annual Ig Nobel Prize ceremony. Both the Ig Nobel Prizes and the magazine are approaching their thirtieth year of making people laugh and then think.

I met Marc Abrahams in 2006 when the American Association for the Advancement of Science annual meeting was in St. Louis.  The AAAS meeting is always over President’s weekend in February.  During that weekend in 2006, the temperature in St. Louis never got higher than ten degrees Fahrenheit.

We were introduced in a crowded bar in the conference hotel by the science writer Katharine Sanderson, then a science writer for Chemistry World magazine in the U.K. Sanderson had written about the history of the chemistry museum I worked for and thought Marc would like it.

I had never heard of the Ig Nobel Prizes, but loved the idea from the moment Marc began explaining them.  The ten annual prizes mirror the actual Nobel prizes, though not strictly.  They are awarded for actual published scientific research about strange topics.  For example, this year, the Medicine Ig Nobel Prize went to a Japanese doctor who published a paper describing a self colonoscopy.