"Klara and the Sun" by Kazuo Ishiguro, a Review 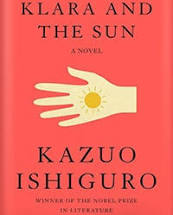 Spoiler Alert!!
I am going to talk about the end of the novel. If you haven’t read it, I don’t want to ruin the read for you.
Klara and the Sun, the new novel by Kazuo Ishiguro, is sad, beautiful and haunting, as are all of his eight novels. Each of the eight novels are different in setting and characters and time period. His main character can be an English butler, a single mom in post-war Nagasaki, a teenager raised to be an organ donor, an old couple in medieval England losing their memories as they wander in search of their son, or an aging Japanese painter remembering his life after World War II.
In Klara and the Sun, the protagonist is an “Artificial Friend” always referred to as an AF*. She is an AI (Artificial Intelligence) robot companion for a teenage girl named Josie. At the beginning of the novel, we see Klara in the store that sells AFs and other household items. She is very curious about her world, more curious than other AFs, even the new B3 AFs that have recently been added to the store’s inventory.
We see the world through Klara’s eyes from within the store until she is purchased by Josie’s mom. Through most of the novel Josie’s health is in decline and only Klara maintains hope that Josie will get better. Klara’s hope is based on her deep and serious, almost primal, worship of the Sun. AFs were designed in a way that required solar power. Klara observed this and spoke often of “the sun’s nourishment.” Not just for herself, but for humans and animals.
Klara believes the sun goes into the ground at night. She twice goes to a barn to address the sun on Klara’s behalf and finally make a deal with the sun to heal Josie. Then, at the worst of Josie’s decline, her bedroom is suddenly flooded with sunlight and her rapid recovery begins. But this story is Ishiguro, not Disney.
As Josie recovers, both Klara and Josie's neighbor/boyfriend Rick become less and less important. At the end of the novel, Klara is confined in some kind of junkyard, still conscious, but no longer humanoid. Like someone who loses the use of their body, but keeps her memories, Klara can review the events of her life while she waits for the slow decline to nothing that seems to be the lifecycle of AFs.
The story is not as wrenching as Never Let Me Go—the story of young people bred and raised to be organ donors. It is not quite as ironic as The Remains of the Day and the mountain of regrets that haunt the late life of an English butler. Nor is it quite as odd as The Buried Giant and its quest through medieval England to find a son who may or may not exist. But Klara and the Sun is thoroughly sad, especially if Klara, the AF with the truly sunny disposition, is telling her story from a junkyard.
We get hints of rebellion against AFs and AI from the people in the city so we don’t know why Klara is in the scrapyard. As with the end of other Ishiguro novels, the protagonist is in a terrible place with little hope, but there is still life: whether it is the aging butler who knows that his world has passed away and love has passed him by, or the organ donor barely alive and one operation of from certain death, or the old couple lost in the mists of memory loss, or Klara still exploring her world with the senses she has left.
I have read all of Ishiguro’s novels and re-read Remains of the Day. I may re-read that again. I might also re-read Klara and the Sun to look more closely at how Ishiguro portrays misplaced faith and deep misunderstandings. The future of AI looks hopeful for the rich and privileged and bleak for everyone else. Klara and the Sun captures that perfectly.
Here is a review of three of Ishiguro’s novels related to war and its aftermath.
Here is a contrast of Ishiguro and Mark Helprin, my favorite living authors.
Here is a look at the similarities between and army Sergeant’s Major and an English butler.
*It took me about 50 pages to get used to the AF acronym. I am an Air Force veteran so AF wants to be Air Force in my head. Also, some of my friends, including younger Army friends, use AF as an emphatic suffix: Shamrocks are lucky AF (for As Fuck). Einstein is smart AF. An Artificial friend in the Air Force would be AF AF AF!
at May 11, 2021

"He's Got No Damn Common Sense" said Sergeants of Soldiers, But It's True of All of Us

By the time Thomas Paine wrote  Common Sense in 1775 ,  the idea of common sense was already disappearing.  "He's got no damn commo... 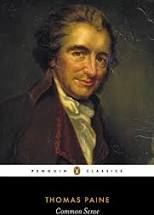