Talking About Veterans with Paws for Purple Hearts

This evening I had the chance to speak with several staff members of Paws for Purple Hearts: an organization that provides and trains service dogs for recovering veterans.

The people I spoke with train dogs to be companions to veterans and provide training for veterans who bring the dogs into their lives.

My daughter is a clinical consultant for Paws for Purple Hearts. She asked me to speak to the group about my experience serving in the military during and after the draft and the Vietnam War, and then returning in 2007 and deploying to Iraq.

I spoke about soldiers I served with in both time periods: how they were the same and how they were different in the 1970s and 2010s.  Paws for Purple Hearts works with veterans from our recent wars and from the wars of the last century.  Soldiers, like all of us, are shaped by the society we live in.  The difference in the experience of draft-era veterans and current veterans is most evident to me in the subject of suicide.

I told the group about how suicide was treated in the 70s and in the 2010s after I returned from deployment.  It was so different. I wrote about it here. Suicide was condemned by everyone in the 70s. The soldiers I knew who took their own lives after Iraq were treated the same as combat deaths.

In both the 70s and the 2010s, I knew soldiers who could not stop their hands from shaking and were kept on limited duty so they could retire.  They were combat veterans suffering with PTSD but wanted to finish their careers.  The military is certainly better about dealing with PTSD now than during the Vietnam War, but the kind of person who becomes a soldier has trouble dealing with personal weakness.  So it is important to deal with soldiers as individuals who need help but do not want to feel weak.

I got a lot of good questions in the Q&A.  One was about how counselors could best work with older veterans.  The soldiers who served during the draft era in general and the Vietnam War in particular often deeply mistrust the government and authority.  I knew and know many veterans of that era who felt betrayed and abandoned by the government that sent them to a hopeless war.  I said it was important to acknowledge the importance of their service and the sacrifice they and their friends made.  Being part of the welcome home they did not get 50 years ago could help establish trust.

Next time I go to Richmond, I hope to visit Paws for Purple Hearts in Ruther Glen, Virginia, near my daughter's home.

The Mission of Paws for Purple Hearts:

Paws for Purple Hearts improves the lives of America’s Warriors facing mobility challenges and trauma-related conditions such as PTSD and TBI by providing the highest quality assistance dogs and canine-assisted therapeutic programs; and by building public awareness about the important role dogs play in helping Warriors along the road to recovery.

Last night I read the original version of "The Three Little Pigs" in French. Children's books used to be so much more grue... 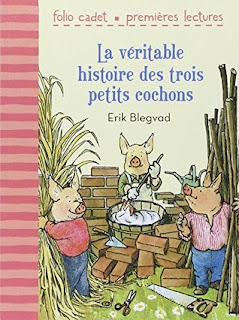